Identifier
1998.576.1
Date Created
1907
Work Medium
Oil on Canvas
Dimensions
32 in x 26 in
Thesaurus of Geographic Names Location
Grand Rapids
Art & Architecture Thesaurus Categories
oil paint
Historical Context
Mathias Alten, a painter of much wider acclaim than the boundaries of this community, chose to make his home, raise his family, and paint in Grand Rapids for the majority of his life. Today, a century after Alten began capturing scenes of Grand Rapids, the city is still recognizable in his work. The sampling of Grand Rapids scenes he offers serves as a historical record for a city that continues to redefine itself.
Description
Overcast sky with tall trees with colored leaves in foreground.
Credit
Gift of George H. and Barbara Gordon 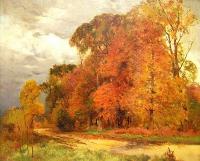 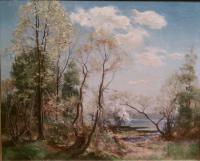 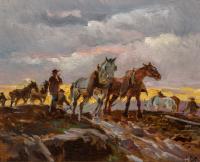