The Sources of Wealth

Both lunettes were painted by noted Grand Rapids artist, Mathias Alten (1879 – 1938). They were removed from the bank during renovations in the 1970s. In 1995 they underwent conservation by the Detroit Institute of Arts prior to being donated to the Grand Rapids Art Museum.
Description
Lunette mural of multiple women, some nude, some clothed. Farming equipment at either corner, anchor and rope at the center bottom. One "angel" like woman floats above the rest carrying a staff. "The Sources of Wealth" at the bottom.
Credit
Gift of Old Kent Bank; transfer from the Grand Rapids Art Museum. 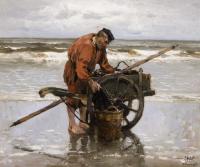