Identifier
2001.1020.1
Date Created
1932
Work Medium
Oil on Canvas
Thesaurus of Geographic Names Location
Grand Rapids
Art & Architecture Thesaurus Categories
oil paint
portraits
Historical Context
Mathias Alten, a painter of much wider acclaim than the boundaries of this community, chose to make his home, raise his family, and paint here the majority of his life. Today, a century after Alten began capturing scenes of Grand Rapids, the city is still recognizable in his work. While the identity of this sitter/ or model is unknown, she is wearing a formal dress which points to a portrait and not a figural study.
Description
Young woman in pink dress seated in wooden chair with one elbow resting on the back of the chair.
Credit
Gift of Anita Gilleo 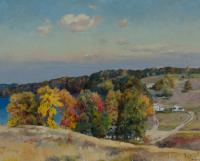 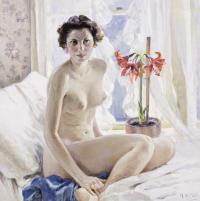